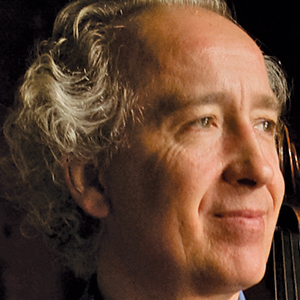 The eminent French cellist Jean-Michel Fonteneau has performed and taught around the world. As a soloist and chamber musician, he has appeared throughout Europe, Asia, Africa, and North and South America. He has served as a professor of cello and chamber music at the San Francisco Conservatory for the past two decades, in addition to performing and teaching annually at Yellow Barn.

Jean-Michel is a founding member of the Quatuor Ravel which received top prizes at the Evian International String Quartet Competition in 1989 and won the Victoire de la Musique Classique in 1994. The Quatuor Ravel performed annually at the Concertgebouw in Amsterdam, as well as regularly at the Théâtre des Champs-Élysées, Salles Gaveau, and Suntory Hall. They also toured extensively throughout the United Kingdom, Germany, and North America. Jean-Michel created and led the first ever string quartet residency program in France.

A passionate and dedicated teacher, Jean-Michel previously served on the faculty of the Conservatoire National Supérieur de Musique in Lyon, France before coming to San Francisco. His students have won international competitions—including the Bordeaux International String Quartet Competition —and gone on to major solo, chamber, and orchestral careers. His students have appeared at Carnegie Hall, The Kennedy Center, the Concertgebouw, the Wigmore Hall, the Verbier Festival, and on many more of the world’s premier stages. In addition to his annual residence at Yellow Barn, he previously taught at Domaine Forget, the Casalmaggiore International Music Festival, and the Morges Summer Academy in Switzerland.

Jean-Michel is currently a member of the San Francisco Piano Trio together with violinist Axel Strauss and pianist Jeffrey Sykes. The Trio performs annually at the Bach Dancing and Dynamite Society, along with regular performances throughout North America. He also performs regularly with the Houston-based Music in Context ensemble dedicated to historically informed performance on period instruments.

Jean-Michel studied at the Ecole Normale Supérieure de Musique de Paris and plays cellos made by Francesco Goffriller in 1730 and Andrew Carruthers in 2016. He lives in Berkeley, CA together with his wife Dana.